For the past few months or so I have been fully involved in a design challenge around “Healthy Living”. What made this challenge particularly interesting, was the fact that we had so many people that were going through there first design challenge ever! This meant that we all had to put on our empathy hat and really try to take on the role of a beginners mindset, which was probably the biggest struggle I had to overcome during this challenge: how to be a leader of a design challenge with a new team of beginners.

“It’s funny how much I can feel the beginner-ness. This isn’t a bad thing- everyone has to start somewhere- it’s just interesting to be in a new place this year in ID. In the groups we were broken up into, there was me and one other Disney cohort member and then 5 Jobs members, and I observed Margaret and I from the Disney group often helping to lead the Jobs cohort with how we should be tackling the challenge.” – Starting a Design Sprint

One of the hardest culture shift for a new design thinker is starting with problems and not jumping to solutions, and also being okay with messiness of the design thinking process.

We started with a picture of a garden and a question:

As a team with a majority of beginners, the instinct was to jump to the solution “let’s build a new garden!” However, I think my leadership skills grew at this point because I really helped to steer our team back on track with brainstorming problem statements first by encouraging the team that the garden may not be related to our final design.

Actually, we had a news reporter from the AJC here on the day we were observing the garden who talked to our team in particular for a good bit of time. It was great to here new members of the Innovation Diploma being able to articulate some about what we were doing and why we were doing it. I was actually quoted in the article, which was cool because I don’t think I’ve ever clearly written out one of the ways that ID has shaped my opinions on college.

“It’s made me realize there can be a lot more to school,” she said. “There are certain schools I can figure out quicker, ‘Yes, you are right for me; no, you’re not right for me’ based on how they approach learning. How do they think about what school means? You can have the facilities and you can have great professors, but if you’re not really about the real-world experience and actually helping other people, then why do we do all this learning? It’s to then better the world and better others.”- A Real World Diploma (AJC)

After some brainstorming about what was going on in the garden, we started thinking about how the cafeteria could maybe use vegetables, which lead us to create a how might we (HMW) problem statement: “HMW make the cafeteria more eco friendly?” We used a dot vote process to pick this HMW, so it was agreed on by the team, and it ended up leading to a lot of those semi stereotypical ideas about getting rid of Styrofoam from the cafeterias.

Then we talked to a user. We realized from our user that actually there was a bigger problem, which she was very passionate about: sustainability and recycling.  So we pivoted.

Pivoting to a new HMW was one of the first big challenges our team overcame, and I was so happy that we got through it! It can be really hard to drastically pivot. Even now, about 2 and a half months later after lots of prototyping and pitching, our team still isn’t sure exactly how we made this pivot.

Sometimes a team just get’s a funny feeling; “This isn’t the right problem.” I think the trick was that we never stopped asking questions and kept following our user: “Why is this garden here? Who’s job was it to keep it up? Who approved for it to be created? Is it being used? What was the original purpose? Why did we not know this garden was here? Does anyone else realize it’s here? Why do students not take care of the garden? Do students even care about the garden?”

Our team never stopped questioning, and this is why we were able to realize that we were solving for the wrong problem. However, we got caught in a designers trap… Too many members of the team fell in love with an early prototype.

This first prototype was leading us back to solving for getting rid of Styrofoam plates. What didn’t help was that we fell into another beginners trap where we asked one of our users “do you like this idea” during our first interview with her. This is a trap because I’ve learned that the first time you interview a person, you are looking for stories that will help you uncover the problem. You are not looking for feedback on a prototype at this stage in the process.

I noticed that other members of the team were confused at this point as to what we concluded from our interview, but I didn’t have a helpful answer. I actually found myself not caring about the challenge all that much at all because it just all felt wrong.

We didn’t have a clear user, prototype, or even a problem, but we knew we were working on recycling. This feeling occurred for me right before our first pitch, and at that point in time it felt too scary to say, “We’re going about this wrong. We need to stop and backtrack.”

I wonder if we have gotten in what I call the bloggers trap (because I often hear that this is why people don’t end up sharing blog post), where we get stuck wanting to create something big and amazing, and we forget that it is ok, and even necessary at times, to start with things that are small and may seem trivial now, but could have a large impact in the future once you add lots of little changes/ideas together, so in the end nothing happens out of fear of failure of it not being big and amazing. Bloggers Trap

Thank goodness we went and talked to more users. Some of our team actually went on an observational walk in the middle school where we discovered a gem insight that went on to shape the rest of our design: the middle school does not have recycling bins because they took up too much space.

Our first pitch was pulled together in a major time crunch. However, sometimes a time crunch is exactly what you need to find a great idea.

To summarize the design of our prototype: my team redesigned the waste bin so that a trash and recycling bin were connected with the recycling bin on top, thus using vertical space instead of horizontal space.

I strongly lead the team with this first pitch, which was a difficult choice to make. A struggle I’m constantly wrestling with is: “I wonder when it is right to lead by example versus letting others experience and struggle with something on their own.”

In this particular instance, I decided to lead by example and do most of the pitch creation. I think this decision was best for the situation because we were really on a time crunch, and I think it helped for some of our beginners to see how a pitch looks before trying to give their own.

We didn’t just stop with this first pitch though. We have ventured forth since just this little prototype made out of paper and old plastic containers and went on to design a full scale prototype that we used to experiment with our design in classrooms. From this point on, I actually joined in with the beginners because I’ve never really had a physical product go this far in a design challenge. 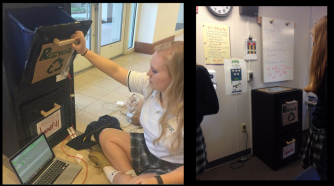 Most of the time at school, when we work on a design challenge, after that first prototype and a presentation of the idea, that is where the idea ends. We would then crumble up the prototype and put the materials back in a bin for others to use. Instead, we learned about taking our prototype to the next level and how to make a full scale model that can actually be used. We even learned some tech skills with how to use Makey Makey to set up a computer system to count how many times people were using our recycling bin.

Our design ended up being a huge success even as a prototype! We noticed an increase in the amount of recycling by 100%, conversations were sparking around waste and the environment, custodians said rooms were cleaner, and other teachers noticed the prototype and wanted one of their own!

responding to the users wants and needs, and as of November 4th, we are now about to go into a more professional product design process. What started as just a design challenge has now become a full scale coVenture that we plan on working on throughout this year, and no one on our team has ever done something like this where we actually are creating a real, marketable quality, product. 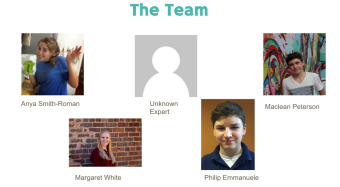 My teammates can no longer say they are a beginner to design thinking as a mindset and tool, because now they have all gone through a challenge and participated in many events and activities that have allowed them to grow as designers. However, we will all be beginners in this new phase of our journey as designers.

In the road ahead there will be lots of questions, user centered feedback and iterations, technology to learn how to use, wording choices to make, expert guidance to find, and designer traps that we have to overcome. While this road ahead is new and will be full of moments of hard work and struggle, this messy process is one that I look forward to because as a designer, we learn to live in the mess to shape the organization of the future.